Nine low-intensity blasts rock the temple town; the Mahabodhi Temple and the Bodhi tree do not suffer any damage

Nine low-intensity blasts rock the temple town; the Mahabodhi Temple and the Bodhi tree do not suffer any damage 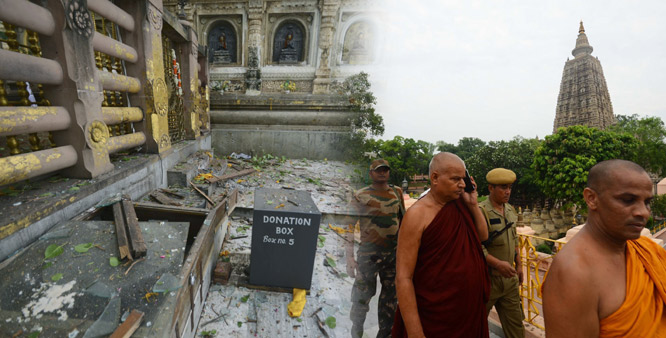 In a well-coordinated terror attack, nine low-intensity serial blasts on Sunday targeted the world renowned pilgrimage town of Bodh Gaya and Maha Bodhi Temple complex, one of the holiest Buddhist shrines, early in the morning that left two monks injured.

Frequented by Buddhist pilgrims from Sri Lanka, China, Japan and the whole of southeast Asia, the temple and the Bodhi Tree, under which Lord Buddha is believed to have attained enlightenment, did not suffer any damage in the blasts which shook the holy town.

The monks, Tenzing Lama and Bala Sanga, are admitted at the Anugrah Narayan Magadh Medical College and Hospital (ANMMCH) at Gaya and their condition is stable, hospital superintendent Sitaram Prasad said.

Lama hails from the Tibet Autonomous Region, while Sanga is a Myanmarese national.

A team of doctors were attending to the injured duo and monitoring their condition, Dr. Prasad said.

The explosions, the first of such act to target the UNESCO heritage site, took place between 5:30 a.m. and 5:58 a.m. Last year, the Delhi Police claimed to have foiled a ‘fidayeen’ attack in the town with the arrest of suspected Indian Mujahideen elements to avenge “atrocities” against Muslims in Myanmar.

No group has claimed responsibility for what the Centre and State government have described as a terror attack in a region where Maoists have a strong foothold.

“While four blasts took place inside the Mahabodhi Temple complex, three occurred in Karmapa monastery, one each near near the famous 80-foot Buddha statue and at the bus stand near bypass,” DIG Magadh range Nayyer Hussnain Khan told PTI.

Union Home Secretary Anil Goswami told PTI in New Delhi that serial explosions inside and outside the Mahabodhi Temple in Bihar were a ... and NIA and NSG teams have been sent for post-blasts investigations.

Bihar Chief Minister Nitish Kumar, who rushed to the blast site from Patna, about 100 km from Patna, demanded deployment of Central Industrial Security Force (CISF) for security of the shrine.

“The serial blasts deserve strongest condemnation in strongest possible words as the perpetrators targeted the place of religious faith of crores of people with an aim to create fear among them,” he said.

Arvind Singh, a member of Mahabodhi Temple Management Committee said the two injured included a national of Myanmar and another of Tibet. They have been admitted to Magadh Medical College and Hospital, he said.

Mr. Singh said two other bombs, one near the 80-foot statue and one at bus stand have been defused.

Asked about the nature of explosives used, S.K. Bharadwaj, ADGP (Law and Order) said they were low intensity time bombs.

“We got information about six-seven months back that there may be a terror attack on the Mahabodhi Temple. After that we had beefed up security and deployed extra forces“.

“In Bodh Gaya temple, the police security arrangements are only outside the temple while the security inside is looked after by temple trust officials,” police said.

“The sanctum sanctorum of the Mahabodhi Temple is intact. The temple premises have been sanitised,” Mr. Khan said.

An official of the Bodh Gaya committee said, “There were four blasts inside the temple premises. Fortunately, there was no damage to the Bodhi Tree or the main temple structure.”

“In the first blast which took place near the Bodhi tree, a table was blown up because of which two persons were injured. The second blast, I think, was inside the enclosure where books were kept. The furniture was damaged but there was no damage to the monuments or statues,” he said.

With reports that central agencies had warned about this attack and given specific inputs to the State, the BJP and other opposition parties accused the Centre and the Bihar government of having failed to take steps to avert the terror strike

“It is a serious issue that central agencies had warned about this attack and given specific inputs that Bodh Gaya would be attacked and still no proper arrangements were made (by the state government). The central government must also take responsibility to avoid such attacks,” BJP spokesperson Prakash Javadekar said in New Delhi.

Congress general secretary and communication department in-charge Ajay Maken said, “We condemn this horrific incident in Bodh Gaya. I urge the state government and other agencies to bring the guilty to justice as soon as possible. We also wish speedy recovery to all the injured.”