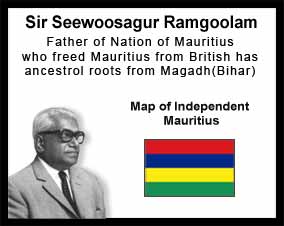 Sir Seewoosagar Ramgoolam (SSR) was born in September 1900 and died in December 1985. His father was a labourer, who arrived from BIhar in the 1870's/1880's.  He was a medical practitioner, graduated from University of London, UK. He led Mauritius to Independence in March 1968 and was the Prime Minister till June 1982, as he lost the General Election. SSR is still respected/liked by nearly all Mauritians, irrespective of religions, castes, races.  Today, Mauritius is considered as one of five best counties in Africa with a per capita around US $ 8000-10,000, literacy rate around 95%, free education (primary, secondary ) for all Mauritians  and every Mauritian could find a place in a primary or secondary school, reasonable welfare/social security to protect the underpriviledged/old people, reasonable standard of free public health service,sucessful family planning, free and democratic country, SSR has contributed a lot to improve the life of all Mauritians.  He was a great patriot and someone who loved his country.  He put a lot of emphasis on education and he always stated that the only to fight poverty, deseases, underdevelopment is through: Education/Training.

I don't think his father Moheeth Ramgoolam was taken forcibly by the British to Mauritius to work as labourer on the sugarcane fields of the White Mauritians.  They (The Indian immigrants) came voluntarily to Mauritius with the hope of finding a better life than the were enduring in Bihar Or Tamil Nadu or Maharastra.  After expiry of their work contracts, two-third of them decided to stay and settle in Mauritius rather than returning to their native villages in Bihar/Tamil Nadu/Maharastra because for them, life in Mauritius, inspite of all problems/difficulties they were facing, was better than in Bihar/Tamil Nadu/Maharastra. I believe they took the right decision. Today, their descendants make up about 65% of the Mauritian population of 1.3 million.

There was no need to fight for independence of Mauritius.  The British did not want Mauritius any more. For the British, Mauritius with a size of approximately 2000 square km and a population of 1 million, and with no natural resources, practically no industries at that time, and depending heavily on export of sugar, and according to the Bitish there were grave and serious problems ahead for Mauritius and Mauritians, probably poverty, unemployment, strarvation, social unrest, etc and it was time to get rid of it.  However, these did not happen to Mauritius due to education, reasonably good governance and decision taken.  Sure, Mauritius is a long..long way behind to become like Singapore, but it is quite reasonable place to live.

I would be very happy to read other comments, especially from Biharis